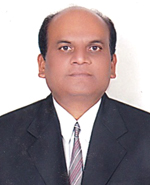 Vasantrao Naik Marathwada Krishi Vidyapeeth was established on 18th May, 1972 by the Government of Maharashtra to fulfil the needs of Agricultural education, aspirations of the people of Marathwada region and to cater to the needs of farmers leading to comprehensive agricultural development of eight districts of Marathwada region. Marathwada region of Maharashtra state is comprised of 8 districts. The region lies between 170 35’ to 200 40’ N latitude and 740 40’ to 780 16’ E longitude. The altitude ranges between 300 to 900 m above mean sea level. The total geographical area of the region is 64.5 lakh ha with 57 lakh ha suitable for agriculture. However, net sown area is only 75 per cent of the total geographical area. The climate of Marathwada experience wide inter district and intra district variability. The region receives annual rainfall in the range of 500 to 1100 mm and comes under assured rainfall zone (60%), moderately high rainfall zone (20%) and scarcity zone (20%). The agricultural production in Marathwada region of Maharashtra State is limited primarily by erratic nature of the monsoon rains. The soils in the region are deep black, medium black, coarse and shallow The major crops grown in the area are cotton, soybean, pigeonpea and sorghum.

VNMKV is focusing to enhance the farmer’s income through many interventions based on the basic and applied research. VNMKV is functioning in all the eight domain districts of Marathwada region through dissemination of modern technologies. Based on the agro-climatic conditions of the region, available natural resources, farmer’s need and focusing the climate vulnerability, the University has developed many new varieties of field crops and horticultural crops with reference to high production potential & quality aspects. New farm implements are also designed. The University has been consistently involved in the mission of generation of research outcome congruent with the agro-climatic conditions of the region and the needs of farmers. Meticulous care is taken to ensure that the developed research technologies should be feasible, economically viable and acceptable to the farmers.

Taking into consideration the availability of land, water and weather conditions and other existing resources, the university has concentrated its efforts to develop suitable technologies for dryland agriculture, irrigated farming as well as hi-tech agriculture.

The University takes pride in releasing crop varieties such as Parbhani Kranti in okra, NHH 44 (Bt) in hybrid cotton, Cotton PA-740, Parbhani Sainath (SCH-25), Pigeaon pea BSMR 736, BDN 711 and BDN 2013-41 , Soybean MAUS 71, MAUS 81, MAUS 158, MAUS 162, MAUS 612 and MAUS 725 in soybean and Parbhani Shakti in sorghum for Kharif and Parbhani Moti, Parbhani Jyoti, and Parbhani super Moti in Rabi sorghum, , Pratishthan in tamarind and many others, which are popular.

The India’s first Bio fortified kharif sorghum variety Parbhani Shakti (PVK1009) was released during 2017-18. It was developed through collaborative efforts between VNMKV, Parbhani and ICRISAT, Hyderabad. The yield potential of this variety is 38.00 q/ha. which is 28.86 % higher than PVK 801 and 27.58% higher than PVK 809 over check varieties. The iron & zinc contents of this variety is 42.00 mg/ kg 25 mg / kg, respectively. The variety is moderately tolerant to grain mold, shoot fly and stem borer.

AICRP on Pearl Millet, Vaijapur, Aurangabad developed Pearl Millet Bio-fortified hybrids AHB-1200 Fe in 2017 and AHB-1269 in 2018 and released at National Level in collaboration with ICRISAT, Hyderabad. Hybrid AHB-1200 Fe is India’s first bio fortified Pearl Millet hybrid which is high iron and zinc with high yielding providing high stover yield, which was tested at 35 locations of ICAR center constantly for three years. Due to its bio- fortification with iron and zinc content, these hybrids are helpful for curing of Anaemia disease and helpful for issues related to Malnutrition under child and women specially pregnant women which is helpful for maintaining hemoglobin level in anemic patients. Due to its bio-fortification, these hybrids provides opportunity to women self-help group for generating employment in village level women by developing value added products.

University has taken a step to harvest the rainwater from the research farms & roof tops and used in many ways. Many numbers of farm ponds have been constructed on university farm to harvest runoff water and utilized it for providing a protective irrigation using sprinkler irrigation method to crops as per requirement for enhancing seed production. Many number of borewells are available in university. The water table has lowered due to deficit rainfall particularly during drought years like 2014, 2015 and 2018. With developed borewell recharge technology, around 55 borewells located at various locations in farms, colleges and hostels in Parbhani campus and outsides campuses were recharged using runoff water for enhancing ground water potential. 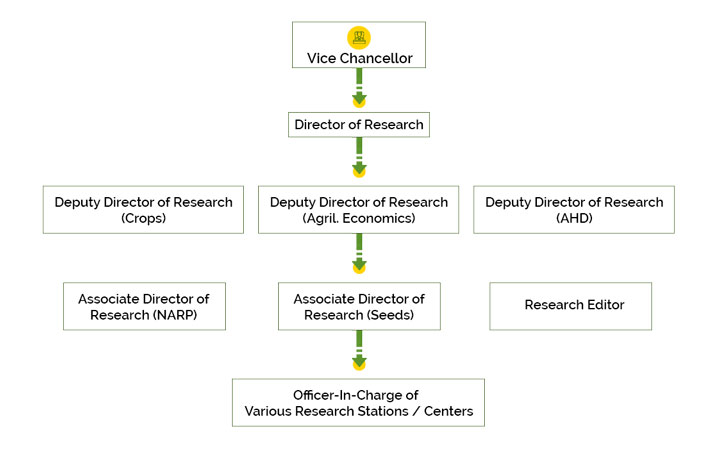 The Marathwada region is distinguished from the rest of Maharashtra State by virtue of its distinct agro-climatic conditions, soil types, topography, location, crops and cropping pattern, land holding and socio economic conditions of farmers. The problems in agriculture and allied sectors are entirely different from other parts of Maharashtra. The university has specifically formulated following mandates to cater the needs of regional agriculture and provide solutions to problems faced by farming community for their livelihood and upliftment on sustainable basis and in turn to contribute to the economical growth rate of national agriculture. To enhance the production and productivity of crops and farm animals for sustainable agriculture and improvement of livelihood of farmers. To conserve natural resources and improve their utilization efficiency for subsistence production of crops and animal produce. To conserve genetic resources and their maintenance for constant crop improvement and animal husbandry by using traditional breeding tools with aid of biotechnology To develop cost effective and sustainable technology for integrated pest, disease and nutrient management. To develop post-harvest management tools and technology for minimizing post-harvest losses in agriculture and production of value added products. To design and develop farm implements and machinery, agricultural process machineries and technology for mechanization of agriculture and proper utilization of natural resources.